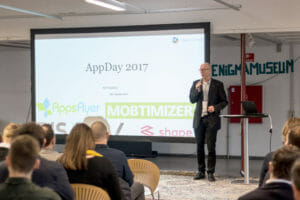 Everyone wants to make business with apps – only the lucky few succeed. Indeed, this is a fact today, where competition in the app stores is fierce. The Copenhagen App Day 2017, hosted by The Association of Danish Media in co-creation with Mobtimizers, offered valuable insights on the future business of apps. Here are Mobtimizers’ selected highlights.

As the app economy continues to climb towards a $180 billion business, apps will continue to innovate in order to connect with consumers and drive value. Martje Abeldt, Territory Director from AppAnnie kicked of the day, talking about the future mobile app economy:

“With 3 billion smartphones available today – and a projected 6 billion in 2020, consumers are spending more time in apps than ever before. 51 minutes of every hour spent on smartphones is spent in apps. By 2021 global app store downloads will more than double to 352 billion and the Google Play store is forecasted to overtake iOS by the end of 2017. As the app market continues to mature download rates will also flatten and a new emphasis will be put on engagement.”

To become successful with apps, you have to think “consumer first”. The younger generations simply walk away if they are not content with your product or service. They demand customer friendly approaches. So you need to cut through the clutter and understand what is relevant for your users. And focus on strategies that generate engagement and revenue. 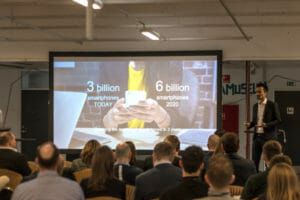 Anders Lykke, Vice President of Priori Data, who works with predicting mobile trends spoke about how to grow apps: “Our studies show that consumers look for well known brands when they surf the app stores. Only 12 of the 100 most frequent search terms are generic today.

To launch a new app today, the challenge is to be relevant and get found. 4,282 apps were introduced during the last week of March alone. And only 189 of them got more than 1,000 installs. Clearly these volumes do not nearly qualify as justification for the massive investment that has been put into the development and launch of the app. For instance, only 19 of the launched apps made more than 1,000 USD in app store revenues from the launch.”

According to Priori Data, too many companies are wasting valuable resources on products that just disappear in the two app stores. Something we at Mobtimizers have also underlined when introducing Search Ads as a means to increased visibility.

“So far, the growth mentality when it comes to apps has been to focus on short term effects and very opportunistic. The argument has been ‘when in doubt – follow the money’. Store owners and the media communicate more or less stand out growth while constantly hyping the next big thing. But the fact is that only 100 companies in the app stores command global revenue,” Anders Lykke said.

Analytics as a discipline remains relatively new. But the most forward thinking companies have learned to use analytics to understand the drivers of cost and revenue. Analytics help predict new trends to optimize business performance. And this also reveals a paradox:

“The most established companies can afford analytics, but strategy departments still struggle to understand mobile. The smaller companies are struggling with a lack of resources.”

Dress yourself for app success

“Today, no apps succeed just from being launched. It is simply not possible. But there are certain measures you can take to help along the process. First and foremost, you need to make sure to hire talent, and train your talent to know how to face the challenges. Partner up with the right technology and people who know how to build short, medium, and long term growth. Be ready to transform. Give the power to your people to impact every aspect of your business – from product to marketing. Finally, all the most successful apps have failed before. But what distinguishes the winners from the competition is that they love data and they invest in analytics”, Anders Lykke finished.

The future of mobile app development

Most companies today have realized the potential in having one or more apps. As this creates an ‘enterprise app explosion’ with a growing number of apps, an increasing number of stakeholders, and an increasing need for connectivity, new trends have emerged.

Rapid Mobile App Development is the concept that more people can create more apps with less requirements for demanding coding skills. Alejandro Montenegro, Solution Architect from Kony, spoke about how to create an app and building it using re-usable components integrating it to connected business systems.

“Today, 25% of all market leaders will lose their number one spot to a company founded after 2000 because of its ability to use digital technologies such as mobile apps (Airbnb, Über, etc.)

At the same time, Gartner estimates that 75% of the workforce will be digital natives by 2025. They will expect most of their interactions to happen on their mobile devices. Thus, companies today are under pressure to provide their employees with cool applications for their work. And to create loyalty.” Alejandro Montenegro said.

Can anyone create an app?

Apps are becoming more intelligent, but by adding simplicity to the building of the first app, anyone can build an app by using reusable components for subsequent apps. This enables agile processes and easy alignment with the corporate branding. And it is possible to use third party components accessible on the marketplace.

“It’s a question of performing the art of the possible: engage with the consumer by creating them a great UX allowing for awesome mobile moments. Creativity is the only limit. Look into what the consumer needs and expects from the app and explore the technological possibilities of including artificial intelligence with virtual assistants and bots. Take advantage of the features of the phone, for e.g., camera, touch id, etc., to create user experiences around that.”

Mobile measurement is key to success

Jonathan Bregman from AppsFlyer took the stage to speak about how to use mobile attribution and measurement to improve and take mobile marketing campaigns to the next level: “41% of mobile marketers say, that the lack of transparency is one of their biggest pain points. 50% are not measuring their mobile engagement and ROI and only 40% are measuring app revenue,” Jonathan Bregman said.

Appsflyer also presented  a checklist on how to measure mobile engagement

Does the world need more apps? 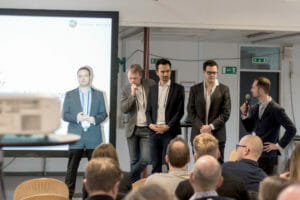 Following the presentations a small panel entered the stage, moderated by Brian Egerup Kjærulff from Mobtimizers. He asked one question: Does the world need more apps?

Anders Lykke: “No. we don’t need more – who cares about quantity? We need higher quality apps.”

Alejandro Montenegro: “I agree. Let’s try to focus on quality. Don’t just build for building apps.” Martje Abeldt: “Look at the apps that are in fact successful, and check out their data for reference.”

Jonathan Bregman: “We see plenty of great apps out there as is, but we also need to deal with visibility. So instead focus on ASO, driving users and engagement. Great apps can retain consumers. In particular in the Nordics you are great at developing the perfect product – now you need to focus on the marketing leg of the app journey.”

Mobile Survey 2015: Companies are shifting focus to mobile
May 15, 2015
How to Outsource ASO and App Optimization Successfully
June 4, 2014
We love SEO. Should we love App Store Optimization equally (ASO)?
January 12, 2015