Planning ASO in-house can be a daunting task for many businesses. Keeping up to speed with a field that continues to develop rapidly is resource intensive, driving many businesses to outsource the work to agencies like Mobtimizers. With experts handling optimization of app store presence and conversion optimization, having a clear insight of ongoing performance and methods becomes a crucial part of working with an agency. Below are examples of key takeaways from a Mobtimizers ASO plan and ASO performance report for a client project.

Client with existing app wanted to improve visibility in their Apple App Store and Google Play Store. App was already launched, but had low overall visibility. Downloads and engagement KPIs were not meeting expectations in target markets.

Substantial resources had been spent on design and development of the app, along with a dedicated budget for marketing and launch activities to improve ASO performance and app store visibility.

Our team approached the project using Mobtimizers’ agile yet effective ASO framework, along with a thorough app rank and competitors keyword analysis. It is important for keywords to be relevant to the core value of the app and the value proposition, while at the same time having significant search volume, as well as being realististic to ranking against competitors.

Pre-analysis included conversion analysis and benchmark comparison of similar apps. It became apparent that there was room for improvement in both keyword and category rankings, as well as the conversion rates in the local stores.

Read here for more details on what services an ASO agency can provide.

Deliverables included several iterations of keyword optimization as well as ongoing experiments of localized copy, feature images, and screenshots. A crucial component of a successful ASO projects is documentation of all changes, as well as short and long term results.

Insight into ASO deliverables and results

After the first 2 iterations of the App Store Optimization, significant improvements can be tied back to the optimized keywords, category change, and ongoing experiments of titles, app descriptions, icon, and visuals.

As mentioned above, achieving better ranking on searches of high volume keywords, requires a selection of keywords with an appropriate level of competition, where it is possible to achieve ranking in the 1st or 2nd position. Another key element is to prioritize keywords that work well together to maximize reach.

Competitive rankings have been improved, moving past a majority of competitors.

Experiments is an effective method to understand and test what drives conversion in Google Play. Google Play provides a range of options to run multivariate tests in each market on localized copy and visuals. In this ASO project, we ran multiple experiments, creating great value for our client. 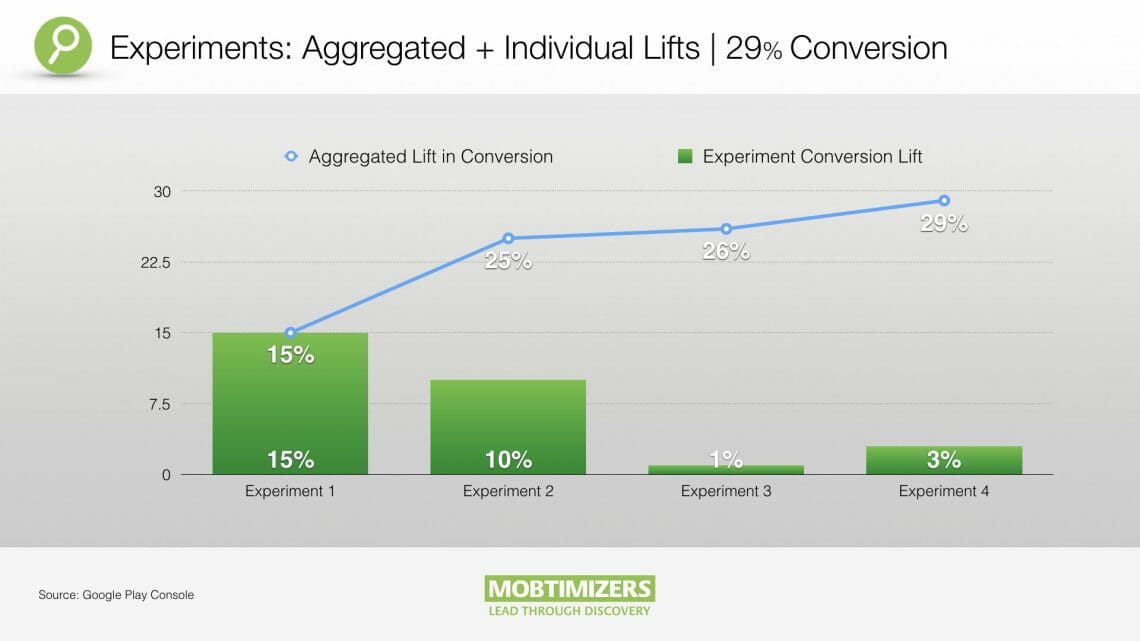 It is recommended to supplement with iOS Ads to boost strategic keywords. App Store Search Ads is a great way to acquire highly engaged users and is also an efficient way to be visible on specific keywords where it is difficult to rank organically short term.

Contact us for an offer for full Service ASO proposal here. We will be happy to talk about an ASO project proposal with you.